It was the last hour of the final day at Paris Blockchain Week Summit. The charismatic Binance CFO Wei Zhao had been speaking back to back. Yet, despite the time and the fact that he must have repeated himself over and over for two solid days, he seemed undeterred. Wearing jeans and a Binance hoodie, he bounded up to meet me, vigorously shaking my hand, clearly enjoying being the man of the moment.

If this were a celebrity party, Binance would be the VIP guest. Changpeng Zhao (CZ)’s creation seems unstoppable. Every project wants to be on Binance, from regular token listings to holding IEOs on the Binance LaunchPad. The Binance Chain has just launched, its native BNB token is climbing in price, and the company has the power to influence the entire community and delist tokens at will.

Minister for Digital Affairs Cedric O later said in a press conference that one of their goals was attracting Binance to France. Yet Zhao confessed to me that he had no idea the French had pushed forward new regulation until now.

With a rather high taxation rate for crypto companies at 30 percent, regulations around ICOs (that no one’s doing anymore) and a lot less flexibility than Malta, it looks unlikely that Binance will move to France anytime soon. Although I wasn’t privy to any backroom chats. 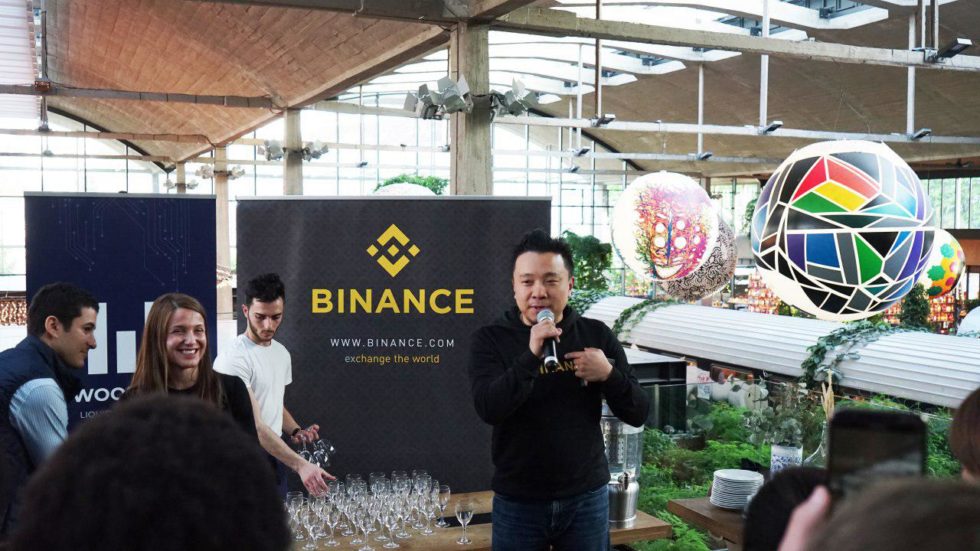 My interview was with Wei Zhao, the man partially responsible for Binance’s epic growth. “I help companies to scale and to grow,” he tells me. Binance now has over 400 people in 30 countries. That’s “a decent sized organization.”

With a background of working in traditional finance, and grooming companies to go public, it’s unsurprising that another major focus of Zhao is institutional investors.

“I worked in Hong Kong, so I’ve been CFO for about four different companies, two of which went public. So, I am quite adept in dealing with bankers, and working with bankers, I am a banker myself. I helped to launch our OTC trading services, Binance off-exchange services. I help bring people from traditional bond traders and that type of trader to cryptocurrency.”

I ask why he made the leap from traditional finance to crypto. He says he would not have done it for any other company than Binance.

I think we are really different from other companies. Most are just exchanges, but we really fiercely want to make an impact in the world… The journey has been awesome so far and I’m in it for the long haul.

One of the best things about his job? Traveling to different places. “I flew around the world four or five times already,” he laughs.

It does speak to the borderless nature of cryptocurrencies. Yes, it’s a digital business but at the end of the day, it’s still a human business, it’s a very human business. The reason this industry is growing so much is that people in this industry travel so much. Like 10 times more than in any other industry.

There’s nothing like human interaction, face to face human talking about things, that’s how you can really impact change.

Does the Recent Leap in Bitcoin Mean the Bear Market Is Over?

It’s not a decisive “yes” when I ask if the bear market is over. Zhao pauses and leans back in his chair. There’s a short silence before he forms his answer, leading me to believe the opposite may be true. But with the most profitable exchange in crypto, bear market or no, nothing’s stopping Binance. He says:

I think there’s generally a lot more interest across the board despite adverse regulation and other adversities. You see general interest in bitcoin from traditional industries, and the rest of the world is showing interest in projects and I think all of it will contribute to the continued growth of the market. The fact that people are thinking “how is this going to impact my business?” Facebook JPMorgan… it lends credibility to the space.

I ask if companies like JPMorgan and Facebook lending “credibility” is rather ironic, considering how Bitcoin was born. He replies:

You need a push which is driven by guys like Facebook and JPMorgan, that gets people thinking about how that’s going to impact institutions and the market. It lends credibility, mindshare, and shows that our actions are getting noticed, that’s what it takes.

So, what’s it like working with one of crypto’s biggest personalities? “Awesome, it really is awesome!” he enthuses, “he’s extremely transparent, diligent and extremely honest, he’s also extremely intelligent, and very patient.”

I ask if he was in complete agreement about the recent delisting of Bitcoin SV, to which he nods his head. Presumably, he’s been fielding questions on the subject all day long and his answer is extremely diplomatic.

“We have a very rigorous delisting process, and we also have a regular quarterly review. This quarter a lot of the comments we’ve written out our rationality… I don’t have any other comments on that.”

Finally then, who does Zhao believe that Satoshi Nakamoto is? Clearly, not Craig Wright.

“I think its a community,” he replies. “It’s like ‘I am Bitcoin’, you know that movie? ‘I am bah, blah blah’? It’s like that with Bitcoin. It’s a community. And we’re surviving… I believe that every day that you survive extends your survival… There is a reason why he or she wants to remain anonymous, because it’s not important, it’s a community.”

What do you think of Zhao’s comments? Let us know your thoughts below!