Tech businessman and crypto advocate John McAfee has announced his intent to run for the office of President of the United States in the 2020 election.

This is the second time he has run for president, with his previous campaign in 2016 also being with the Libertarian party.

“In spite of past refusals, I have decided to again run for POTUS in 2020,” McAfee announced on Twitter.

If asked again by the Libertarian party, I will run with them. If not, I will create my own party. I believe this will best serve the crypto community by providing the ultimate campaign platform for us.

Involvement in the Crypto Space

The McAfee name has become synonymous with “antivirus.” As the founder of McAfee antivirus software, John McAfee has always been interested in cybersecurity, a key feature of Blockchain technology and cryptocurrencies.

By the mid-1990s, McAfee’s software was being used by half of all Fortune 500 companies, a feat which earned him a net worth of $100 million.

As a long time libertarian, McAfee has also strongly advocated for the right to privacy and minimal government intervention in citizens’ affairs.

With a Twitter following of almost a million people, McAfee regularly promotes altcoins that he finds interesting, though he has also been criticized for charging $105,000 per tweet.

He’s also not one to hold back on controversial opinions, recently sharing how he strongly believes ‘powerful forces’ are trying to derail the progress of the cryptocurrency revolution, declaring there is a “war” going on between cryptocurrencies and the powers that be.

A Good Spokesman for Crypto?

Described by many as paranoid and eccentric, John McAfee’s life might as well be a Hollywood movie.

From guns, drugs, and running from the police to making and then losing a fortune, the John McAfee of today may have been a great symbol for the early cryptocurrency space as it was in 2011. 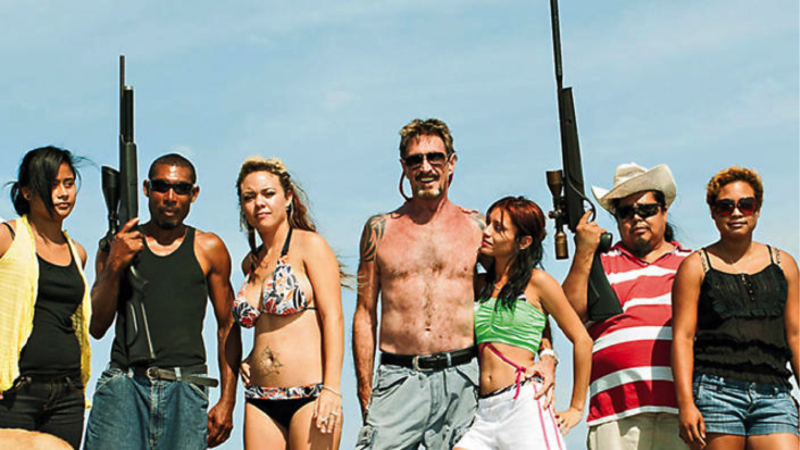 However, as the industry slowly matured and is entering the mainstream, some might argue that it needs a less controversial character representing it. Right now the winning strategy is education and positive public perception.

Although McAfee does share a lot of great content about the value of decentralized money transforming society, his reputation will most likely keep him confined to the libertarian party at most and hamper his chances at becoming either a major-party candidate.

No one thinks McAfee will actually become president, even McAfee himself admitted as much.

But we do know his goal is to promote the crypto community, and in that regard, perhaps the community is better served with a more polished representative.

Who do you think should run for president on behalf of the crypto community? Share your thoughts in the comments section below!

Disclaimer: The views and opinions expressed in this article are solely those of the author and do not necessarily reflect those of Bitcoinist.com. Claims made in this article do not constitute investment advice and should not be taken as such.