A digital canvas dubbed Satoshi’s Place appeared online, allowing users to draw whatever they find fit, one pixel at a time. The MS Paint-like experience costs one Satoshi per pixel and users are free to show off their talent in whatever form they find fit. 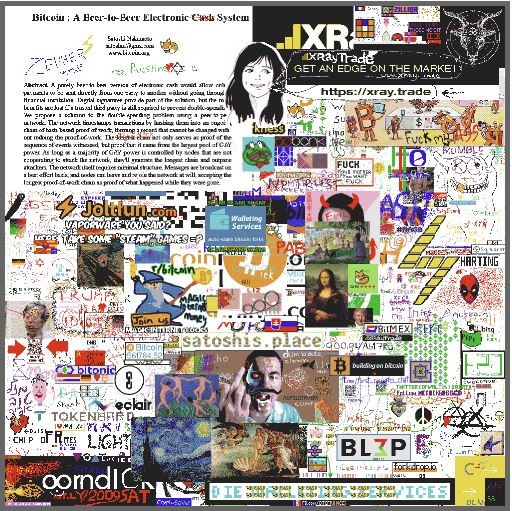 Satoshi’s Place is a simple online artboard which is powered by the Lightning Network. The digital canvas is comprised of 1 million pixels and each one of them will cost you 1 satoshi to paint. Apart from providing wide leeway for users to express their fine art skills, it’s also intended to provide a way to experience the way micro-transactions are handled through the Lighting Network of Bitcoin.

Since the canvas is censorship resistant, anyone can draw virtually anything. What is more, all pixels can be re-painted. The combination of both has caused some unparalleled masterpieces such as Da Vinci’s Mona Lisa, as well as Van Gogh’s Starry Night.

However, the opportunity to write and draw whatever one wants has also provided means for one particular dispute: Bitcoin (BTC) VS. Bitcoin Cash (BCH).

BTC VS. BCH in a Fully-Fledged Art Battle

The fact that each pixel on the Satoshi’s Place canvas is re-paintable fuels the clash even further. Bitcoin supporters are taking the opportunity to have some fun, drawing offensive words and symbols on a painting of Roger Ver’s face, phalluses spitting BCH fire, and others of the kind. Ironically, though, BCH users who’d want to remove these offensive drawings or repaint them in something else would have to use the Lightning Network.

The result is obvious: the canvas is dominated by Bitcoin users who are taking advantage of the quick and cheap micro-transactions to draw whatever they virtually want.

However, while a lot of people find the entire thing incredibly amusing, there are also those who find it insensitive and downright childish.

So basically pay money to doodle some dicks lol wtf. Thousands of years on this planet and we still just draw dicks. There’s literally a guy made out of dicks 😒

Dick pics aside, the Satoshi’s Place project is proving to be a success in demonstrating that Bitcoin’s Lightning Network can indeed support a high volume of cheap and instant transactions.

Do you like the concept behind Satoshi’s Place and its usage of Lightning Network? Don’t hesitate to let us know in the comments below.