What is Ripple? Technically speaking, is Ripple a cryptocurrency in the mold of Bitcoin? The short answer is probably “no,” but that doesn’t stop it from often being lumped into that same category.

Originally released in 2012 as a subsequent iteration of Ripplepay, Ripple is a real-time gross settlement system (RTGS), currency exchange and remittance network. Using a common ledger that is managed by a network of independently validating servers that constantly compare transaction records, Ripple doesn’t rely on the energy and computing intensive proof-of-work used by Bitcoin. Ripple is based on a shared public database that makes use of a consensus process between those validating servers to ensure integrity. Those validating servers can belong to anyone, from individuals to banks.

The Ripple protocol (token represented as XRP) is meant to enable the near instant and direct transfer of money between two parties. Any type of currency can be exchanged, from fiat currency to gold to even airline miles. They claim to avoid the fees and wait times of traditional banking and even cryptocurrency transactions through exchanges.

How Is It Fundamentally Different From Bitcoin?

Banks seem to like Ripple, and payment providers are coming on board more and more. It is built for enterprise and, while it can be used person to person, that really isn’t its primary focus. The main purpose of the Ripple platform is to move lots of money around the world as rapidly as possible.

Ripple’s token, XRP, isn’t mined like Bitcoin, Ethereum, Litecoin and many other cryptocurrencies. Instead, it was issued at its inception, similar in fashion to the way a company issues stocks when it incorporates: It essentially just picked a number (100 billion) and issued that many XRP coins.

What is XRP and What’s It Used For?

As a technology, the Ripple platform may have real value and real history that validate the claims they make for its efficacy. The XRP token itself, however, seems to have negligible use cases. In fact, Ripple had planned to phase it out — at least, until fevered interest in cryptocurrencies began to take off in 2016. Nevertheless, as CNBC noted today, if Ripple hits $6.57, its market capitalization will be bigger than Bitcoin’s.

There are 100 billion XRP tokens that were issued by the Ripple company. At the moment, the company promises that this is the total number of XRP that there will ever be (though, technically, there is nothing to stop them from issuing more tokens in the future). Ripple’s hub-and-spoke design positions XRP in the middle as a tool that is fungible with any currency or digital asset, such as frequent flyer miles. Ripple can settle a payment in 3.5 seconds through XRP and have it available and spendable. The use of XRP is totally independent of the Ripple network in general; that is, banks don’t actually need XRP to transfer dollars, euros, etcetera which is what many small investors might be missing when they are buying the token.

What Is Ripple’s Value Proposition?

The value here is the Ripple network itself and its ability to move assets around the world quickly, rather than in the XRP token.

Banks are able to use the Ripple software to shift money between different foreign currencies. Currently, this is typically accomplished using SWIFT, a system that is cumbersome and relies on the banks having separate accounts in every country they work in. Ripple says it has signed up more than 100 banks (compared to SWIFTs 11,000 financial institutions) including American Express.

So Why All the Hype?

While Bitcoin has seen a dramatic rise in price over the course of 2017, the end of the year saw the cryptocurrency almost breaking $20,000. As the price drove higher, we saw a massive increase in price for a large number of altcoins, with Litecoin jumping from $50 to nearly $400, Ethereum doubling, NEM and EOS going up by a factor of five, and the list goes on and on. The fear of missing out has driven many investors wild and “lower-priced” currencies are attractive to new investors who mistakenly think that the high price of an entire BTC puts the currency out of their reach.

Add to all the hype the rumors that had been swirling on social media through December 2017, that Coinbase was going to list Ripple, which caused the price to surge, which in turn prompted Coinbase to address the rumors in a more generic fashion in this blog post on January 4, 2018:

“As of the date of this statement, we have made no decision to add additional assets to either GDAX or Coinbase. Any statement to the contrary is untrue and not authorized by the company.” 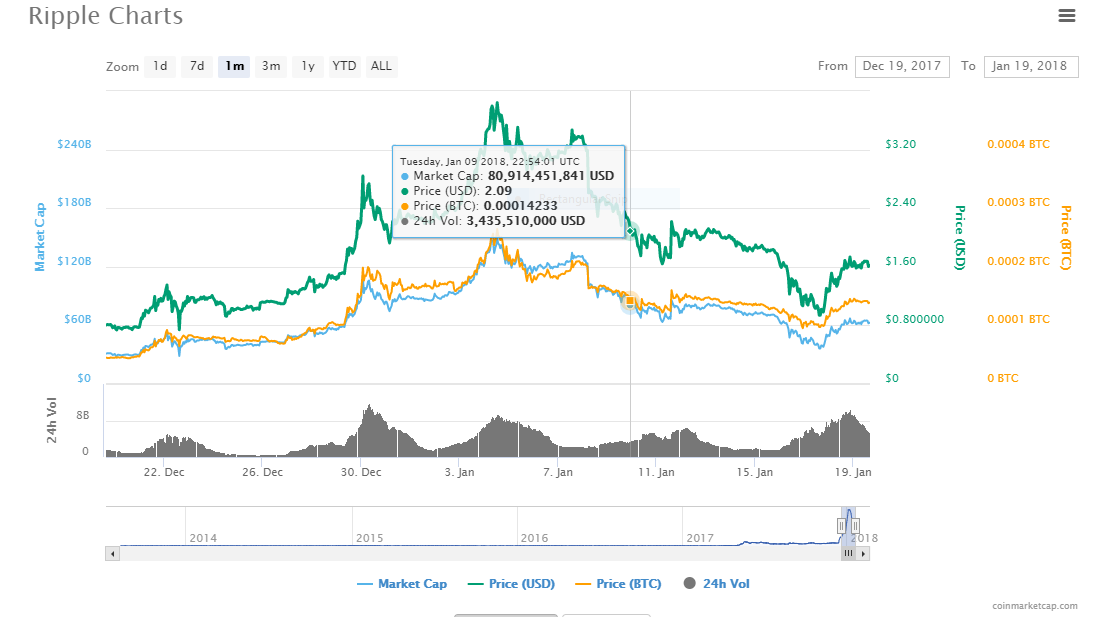 The Coinbase announcement caused a big drop in Ripple, back to around the same levels as before the rumors began. SInce then, Ripple has both dipped dramatically and recovered, as have many other volatile cryptocurrencies. While Coinbase doesn’t support Ripple, there are a number of ways for people to acquire Ripple, should they still want to.

There has been a lot of ink used on criticizing Ripple as well. The complaint from Bitcoin and other blockchain enthusiasts is that Ripple’s centralized control is in direct contrast to the ideals and advantages of decentralized blockchains like Bitcoin.

Ripple also maintains a trusted Unique Node List (UNL) that is meant to protect against potentially malicious or insecure validating servers. It is the UNL that controls the network rules, presenting a conundrum: On the one hand, it protects against problematic validators, but, in theory, a regulating body or government could come in and force a change that isn’t necessarily desirable or is downright invasive. Furthermore, because of a FinCEN violation and fine in 2013, Ripple has updated its policies and will only recognize and recommend gateways that are in compliance with financial regulations.

New York Times reporter Nathaniel Popper commented on Twitter that he has yet to find a bank that anticipates using the XRP token in any meaningful way. Ripple’s CEO, Brad Garlinghouse, has denied Popper’s claims stating, “Over the last few months I’ve spoken with ACTUAL banks and payment providers. They are indeed planning to use xRapid (our XRP liquidity product) in a serious way.” However, as Popper points out, even the banks that he contacted at Ripple’s suggestion were non-committal in their plans to implement Ripple anytime soon.

According to the Financial Times, of the 18 banks and financial services companies publicly linked to Ripple, most of them stated that they “had not yet gone beyond testing” while a few had moved on to using Ripple’s systems “for moving real money.” However,  not one of the 16 companies that responded had used the XRP token.

Bitcoin Is The Only Investment-Grade Digital Asset – Bitcoin Magazine

Why Bitcoin Is Poised To Replace Gold – Bitcoin Magazine